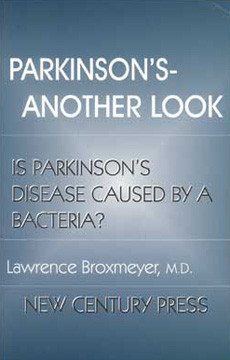 "Recent studies in the Parkinson’s disease literature have cited a tuberculosis-like germ called nocardia as being responsible for Parkinson’s of unknown cause (Kohbata and Shimokawa, 1993) (Beaman, Beaman and Kjelstrom, 1994) (Kohbata and Beaman, 1991). Kohbata seemingly cemented a relationship between nocardia and Parkinson’s by finding serologic evidence in 20 of 20 Parkinson’s patients. With this finding, Kohbata acknowledged that blood tests for nocardia and the mycobacteria such as tuberculosis often cross-react, as they belong to the same order of bacteria, the Actinomycetales. Besides this difficulty in differentiation, a well used medical school textbook of microbiology points out that even among experts, different observers may classify the same strain of bacteria as nocardia or Mycobacterium tuberculosis (Atlas, 1988). To add to existing difficulties, both microorganisms can be ""acid-fast"", retaining a characteristic reddish color after being washed with acid alcohol, a common laboratory reagent. Such a staining characteristic has long been used to identify Mycobacterium tuberculosis. Burn of Yale University identified a gram-positive bacillus from the bloodstream of three infants that had died from Parkinson’s causing Von Economo’s encephalitis (Burn, 1934). This pathogen bore an eerie resemblance to a microbe which was a cross between the mycobacteria and nocardia, the acid-fast forms of which Jackson (1954) of Cornell found in a variety of degenerative diseases including Wilson’s disease, a primary cause of Parkinson’s in the young. Moreover, the important Parkinson’s DATATOP study (1996) unwittingly settled upon an agent originally designed to cure tuberculosis, the MAO inhibitor called Deprenyl. And recently Fuente-Aguado and Bordon (1996), Kurasawa Ikeda and Inoue, 1997), Otaki (1994) and earlier, Mital, Sarkari and Singh (1974) and Solanki and Kothari, (1977) all cured symptomatic Parkinson’s using anti-tuberculous medications. Parkinson’s and tuberculosis share many common threads; both came into force and were linked with the great Industrial Revolution. The substantia nigra was established as important to Parkinson’s through a tuberculous attack on an autopsied patient. (Blocq and Marinesco, 1893). Both diseases share a common preferential site of attack, the convexity of the brain. Parkinson’s last great epidemic, Von Economo’s encephalitis, was, according to Hall (1924), almost indistinguishable from tuberculosis. Even in AIDS, often associated with Parkinson’s, mycobacteria, such as tuberculosis, have been reported as the most common central nervous system pathogens in HIV-infected people (Berenguer and Moreno, 1992). Furthermore, many of the patients with either Parkinson’s or tuberculosis share the common denominator of a chronic wasting disease, a cachexic eating away of the flesh; both are primarily diseases of older people with a slight male preference. "