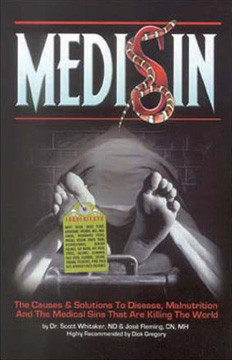 " The death ceremony started as a crude ritual, back in the days of witchcraft. In recent years it has been developed into a science. It usually takes from 10 to 15 years. However modern scientific advancements are shortening this period of time. It starts with one simple aspirin for a simple headache. When the one aspirin will no longer cover up the headache, take two. After a few months, when two aspirin will no longer cover the headache, you take one of the stronger compounds. By this time it becomes necessary to take something for the ulcers that have been caused by the aspirin. Now that you are taking two medicines, you have a good start. After a few months these medications will disrupt your liver function. If a good infection develops, you take some penicillin. Of course the penicillin will damage your red blood corpulscles and spleen so that you develop anemia. Another medication is then taken to cover up anemia. By this time all of these medications will put such a strain on your kidneys they should break down. It is now time to take some antibiotics. When these destroy your natural resistance to disease, you can expect a general flare-up of all your symptoms. The next step is to cover up all of these symptoms with sulfa drugs. When the kidneys finally plug up you can have them drained. Some poisons will build up in your system, but you can keep going quite a while this way. By now the medications will be so confused they won’t know what they are supposed to be doing, but it doesn’t really matter. If you have followed every step as directed you can now make an appointment with your undertaker. "