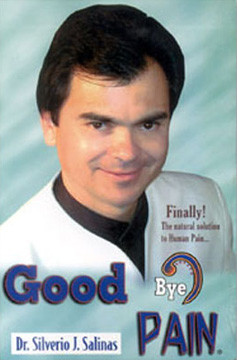 Good bye Pain Upon March the 18th, 1997, for the first time in America and to the rest of the world, Dr. Silverio Salinas presented his exclusive technique “Auricular Analgesia” to say GODD BYE to humanity PAIN, live front of the cameras of the TV program “Occurrio Asi” (This Is How It Happened), for more than 100 million of television spectators. Two months later “ This Is How It Happened” sent Dr. Salinas in a “Good Bye Pain” tour throughout the U.S.A., where Dr. Salinas relieved more than 2,000 people from pain in less than two weeks. “To be able to present a method on T.V., it’s got to be at least 40% effective. The 100% effectiveness of the Method of Dr Salinas to say GOOD BYE PAIN is incredibly extraordinary.