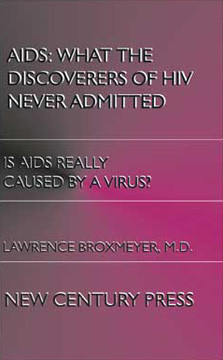 AIDS: What the Discoverers of HIV Never Admitted

Once upon a time, a small group of politically powerful scientists rammed a flawed theory on the origin and cause of AIDS down America’s and then the world’s throat. Yet we are still led to believe that we are fortunate that retroviruses, only discovered in the 1970’s, were uncovered just in time to label them the culprit in a killer AIDS epidemic; lucky that two "HIV’s" were discovered in rapid succession and that the technology and theory to link AIDS to the HIV retrovirus was fully in place, for the first time in history, only a few years prior to the recognition of the AIDS epidemic. Lucky? As the 20th anniversary of the first reported AIDS cases passes us by, AIDS has infected nearly 60 million people of which almost 22, including nearly half a million Americans have died, yet the prospects for a cure or vaccine are as remote as they were 2 decades ago. And although it is currently difficult to find anyone who openly questions HIV as the cause of AIDS, a fast growing number express their doubts privately. By 1979, doctors in Manhattan began to notice a strange new disease killing what had been up to then healthy gay men. As reports mounted, the Centers for Disease Control (CDC) was forced to circulate similar notices of homosexual men in New York and Los Angeles with a weakened immune system dying from heretofore rare causes. (MMWR, 1981) Unnoticed was an earlier raise in the New York infection rate for tuberculosis which, from the onset, the new epidemic emulated. From its conception AIDS was a nightmare of anguished victims, washed with wave after wave of terrible disease, whose physicians, like so many medical priests, helplessly watched them die. U.S. Coastal hospitals in San Francisco, New York and Los Angeles soon turned into war zones.